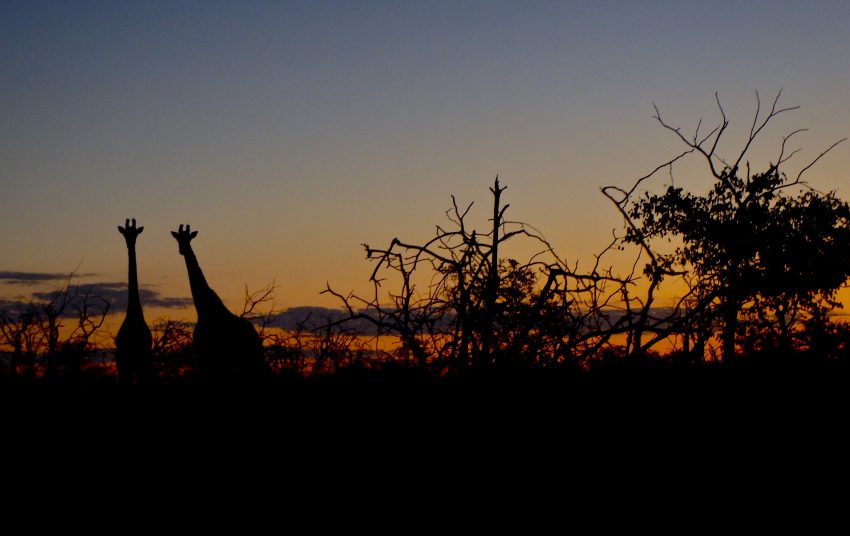 Its time for another beautiful beast and I want to introduce you to one of my very favourites: The “Camel Leopard”.

Why do I think giraffes are cool? They are by far the most elegant weirdo I have ever seen. Their long legs and neck give them the gait of a bored runway model.

When they gallop, it looks like you are watching them in slow motion. Their facial expression reminds me of an elegant lady of the elite, who is tolerating you, despite your unbearable smell.

I once followed a gang of three young, lovelorn bulls who were kept on a game farm. They really liked the girls on the neighbour’s property and would stand at the fence for hours and talk to them.

You can tell Males and Females apart by looking at their head. Both sexes have two little horns on their head, called ossicones. They are called that because they are not actually horns like those of a cow, or antlers. But they are bone (Latin: os) structures. When giraffes are born, the ossicones are still just cartilage and folded inwards. As they grow, the ossicones unfold and become bone. But I was going to tell you how to sex a giraffe. So: Besides the obvious ossicones, males have an extra “horn”: the reinforced bone on their forehead forms a kind of hump, that can grow to quite a noticeable extra horn in some individuals. They also often become darker with age and are heavier than the ladies.

When males fight, they stand quite close to their adversary and swing their heads around hitting the other in the neck, legs or flanks. It looks funny until they get serious and then you worry about one of them snapping their neck.

You wouldn’t think it, but these long-legged eleganzas are actually pretty badass. Giraffes give birth standing up, so the newly born calf plummets about 2m (6ft) to the ground during its first moments alive.

They are huge, but they are still a pray species, albeit a challenging choice of dinner. If running does not get them out of harms way, they will kick. With a force capable of killing a lion. And they eat bones. Sort of. In fact, when Carl Linné first described giraffes, he wrote that they were carnivores. This is of course not true, but if they come across the remains of an animal, picked clean by vultures and ants, they will use their long tongues to twirl bones in their mouths, sucking and chewing on them. This is not a regular part of their diet but they will take advantage of the calcium and phosphorus boost, if it presents itself. I once caught a pair doing this in Namibia and made a video.

Where and how to find Giraffes

Giraffes today are only found on the African continent. And of course in zoos world wide. They are quite plentiful in southern Africa including parts of the Namibian desert. Then there are larger populations in East Africa and two small ones in western Africa. In 2016 and 2017 studies came out, suggesting that what is now considered one species with several subspecies, may actually be separate species. If that should be true, it will mean that several of the proposed species now suddenly have much smaller population sizes and be declared endangered species.

What? But a giraffe is a giraffe, a weird gigantic camel with no hump and a long neck and spots!! Well actually if you look closely, depending on the region, their spot pattern varies. Reticulated giraffes for instance have spots with “clean” edges which can make it look like it is wearing a fishnet. On the other end of the spectrum you have Maasai giraffes with very much jagged, smaller spots. These two species/sub-species occur right next to each other in Eastern Africa. Colors also differ from reddish to light brown spots and white to beige between spots.

How to Protect Giraffes

What is crazy is, that this species that belongs on every children’s drawing of “Africa”, next to the lion and the elephant (both species are plummeting in numbers and getting quite a bit of attention for it…), is quietly disappearing without many people noticing. About 30 to 40% of the total population has been lost in the last 30 years. As far as we know, the main threats to giraffes are human encroachment a.k.a. habitat loss, human-wildlife conflict and poaching for bush meat. How do we change that? Oppose the “second colonization” from China currently happening all over the continent. Support and promote community based projects aiming to help people live safe and sustainable lives and support education for girls in developing countries. All of these options are also good improvements of social justice. Oh, and don’t buy souvenirs or imports made from non-domestic animal parts. Duh.

There is hope: Although two (sub)species are currently listed as critically endangered, the Giraffe Conservation Foundation has for now saved the most endangered (sub)species, the west African giraffe back from the brink of extinction. There are currently an estimated 400-600 of them, living in Niger. Last year, the foundation reported surveying 22 new calves.