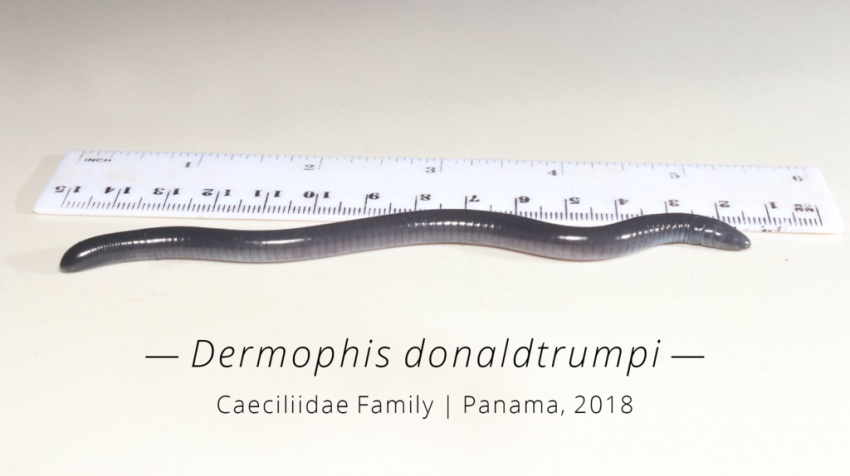 There is an endless number of species on this planet and we are nowhere close to having discovered them all. But scientists and “amateur” specialists are working hard every day to discover more. There is major motivation to do this often difficult work: Besides the fact that you will be the first to realise you are examining a species new to science, discovering a new species also means you get to name it. You write a peer reviewed paper in which you describe your new species and your proof why it is a distinct species and then you give it its scientific name. You don’t have much influence on the first bit, the genus, because that’s depending on where your new species fits in taxonomy. But you, the discoverer may decide the species part.

If I’m confusing you with all this bla, read my last post, how scientific names work.

Often discoverers name the the species after themselves, or people the discoverer admires. That’s why, for example, one of my favorite animals, Temmink’s ground pangolin is called Smutsia temminckii. Because it is named after Dutch museum director Coenraad Jacob Temminck.

Most often though, the species name just describes the species in Latin. For instance, albicollis is often used for species that have a white throat, neck or collar (albi = white, collum=neck).

You can definitely tell there is a new generation of explorers out there though. In 2015, scientists discovered “Sceletorus” and “Sparklemuffin”: Two species of peacock spiders. If you don’t like spiders, do me a favour and search “peacock spider mating dance” on YouTube. You might change your mind. They are the Brazilian carnival version of a spider. Sceletorus, Maratus sceletus, is named that way because it is black and white and looks like it dressed up as a skeleton for Halloween. “Sparklemuffin” didn’t quite make it into science with that name. It was scientifically named Maratus jactatus, although it is still better known by its more 21st century alias. Maybe if the Romans had been better bakers, they would have had a word for muffin and I would now not be translating jactatus to simply mean “jolting, quivering, shaking”, which is something that all peacock spiders are very good at.

The point I was just trying to make, is that when you discover a species and write a paper about it, you have the naming rights. And once that has gone through peer review and a species is named, no-one can change that name. That would defeat the whole purpose of scientific names. We have them to stop confusion with the many, many common names a species may have.

Yes, yes, I was going to tell you about Dermophis donaldtrumpi though!

Now it so happens, that a new amphibian was discovered in Panama and the naming rights were auctioned off, in order to collect money for conservation. Nature people are constantly trying to get their hands on much needed funds for conservation and this, in my opinion, is an awesome idea.

The winning bid of US$25,000 came from EnviroBuild, a company that does decking and flooring. They chose to name the amphibian:

Let me describe this species to you. This animal is purplish-blue and looks like a cross between an earthworm and a circumcised flaccid penis.

D. donaldtrumpi is a species from the caeciliidae family, which means “blind”. Caecilians never upgraded to complex eyes during evolution so they can only see light and dark. In a quite humorous blog post, EnviroBuild’s Aidan Bell draws multiple comparisons between the amphibian and Donald trump, stating that the President, like the animal, only sees black and white. Also, like the underground living animal, the president sticks his head in the sand and has claimed that climate change is a hoax by the Chinese.

So naming D. donaldrumpi this way, is a statement, as especially amphibians are extremely vulnerable to threats brought on by global warming.

D. donaldtrumpi is not the first species to be named after Trump. There is also a moth with an interesting “hairdo” named Neopalpa donaldtrumpi. Obama however, probably holds the current record with 13 animal species named after him, including Tosanoides obama, a fish discovered in a marine national park President Obama had previously expanded.

There is also Scaptia beyonceae, a horse fly with a golden butt, Litarachna lopezae, an aquatic mite with a very big butt, Heteropoda davidbowie, a wife-killing spider (it had the name before it killed it’s partner), Agathidium vaderi, a slime-mold beetle (yes there are animals called that) with a shiny big black helmet-like head, Agra Schwarzeneggeri, a beetle with body-builder “biceps”, Anophthalmus Hitleri, an all-brown (Nazi party’s “corporate colour”) beetle, believed to be a predator, was named in 1937. The list goes on…