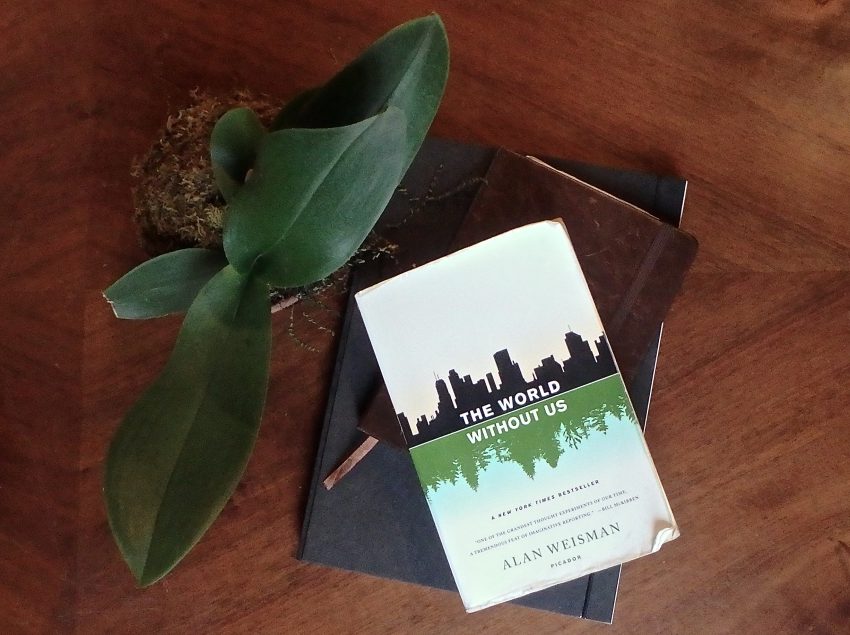 It is January and, where I am, that means woolly socks and vitamin D supplements and only emerging from a cuddly warm corner when you absolutely need to. What better time than this to read all the books I stacked up in the times where I rather was outside.

And here’s one that I absolutely LOVE:

It’s called The World Without Us by journalist Alan Weisman and it was first published in 2007. Yes, it has been out for a while already but the material is as current as ever: Humans are making a great impression on this planet and oftentimes that upsets me. Which brings me straight to the first reason why I love this book:

The entire book explores the idea of what would happen if Humans were, from one moment to the next, to suddenly vanish from this planet. Not much time is wasted on speculating how this hypothetical scenario could happen, but instead, Wiseman explores the likely reality of what would actually happen if this was the case. For this book, he traveled the world interviewing experts of all kinds of fields, asking all of them to explore the scenario in their particular field. In the book we visit abandoned cities in Cyprus, the NYC subway, Chernobyl, farms in England, oilfields in the USA, the border between North- and South Korea…

As I read through the first chapters, meditative tranquility overcame me, as I followed the described deconstruction of first just a house, then all of Manhattan. Weisman writes so precise yet beautifully, that it is easy for your imagination to follow the beautiful process of nature slowly but steadily reconquering the world and making everything beautiful and green again.

I don’t want to spoil too much for you, so I am just going to touch on a few of my favourite chapters.

There is one, where we explore the past, when humans spread across the planet and follow the theory of what effect this invasion might have had on the natural world. I love weird animals, and we get to meet a few.

One chapter that really struck me, was about polymers, so plastics and friends. Yes, plastic oceans are a trending topic these days, but even I, the eco-warrior, learned something new reading this one.

There was also a section that made me want to call Leonardo DiCaprio (the one caring link between environmental concerns and Hollywood) and tell him to turn this into a movie. In it, the crash of the Mayan civilization is explored and what may have been the reason for it. Let me tell you, its thrilling and sounds eerily familiar.

When I read a book I love, I start a “readers list” on the blank page in the very front of the book. I write my name, date and how I liked it (star rating if I’m lazy) and pass it on to the next person, hoping they will leave their mark too. If I really love the book, I just lend it to friends, if I’m not emotionally attached to it (I have a problem), I put it in a public bookshelf in town where people can bring and take books as they please.

This one stays with me and my friends. I never read books twice, but if I do, this one might be my first pick.

*I did not receive any kind of reimbursement for this article/promotion. I just really like this book.

1 thought on “Reading for Nature: My Book Report on Alan Weisman’s “The World Without Us””